Bridge of Remembrance and Memorial Arch

Christchurch’s Bridge of Remembrance and Memorial Arch was one of the city’s most treasured remaining historic structures left standing after earthquakes scarred the region. Its restoration required innovation and imagination.

A powerful symbol of the rebuild, Christchurch’s iconic Bridge of Remembrance and Memorial Arch was returned to full grandeur.

The SCIRT restoration project recognised the importance of the city’s past amid the focus on the future. It proved to be one of the most difficult and rewarding projects of the rebuild.

The Bridge of Remembrance and Memorial Arch was officially opened on Armistice Day, November 11, 1924. Nearly 90 years later, the badly damaged war memorial was again the focus of the people of Christchurch. The Memorial Arch – a site of reflection – was one of the city’s most treasured remaining historic structures left standing after a series of earthquakes rumbled through the region.

Repairs to the 360-tonne, 14-metre high and 20-metre wide Memorial Arch – an imposing structure of sharp lines and ornate decoration – included the insertion of steel inside the masonry columns to strengthen the structure and concrete that increased the weight of the arch to 470 tonnes. The addition of a “rocking collar” at the base further supported the reinforced arch. Significant modifications to the articulation of the structure allowed the rocking action to occur in any direction.

A flyover of the completed restoration work can be viewed on YouTube: https://www.youtube.com/watch?v=EKSUfmg1jzY

SCIRT’s innovative work on the Memorial Arch was recognised with the Canterbury Heritage Awards 2016 Public Realm – Saved and Restored Award.

NB: While several historical and official documents have referred to the “Triumphal” Arch, the correct name is the Memorial Arch. 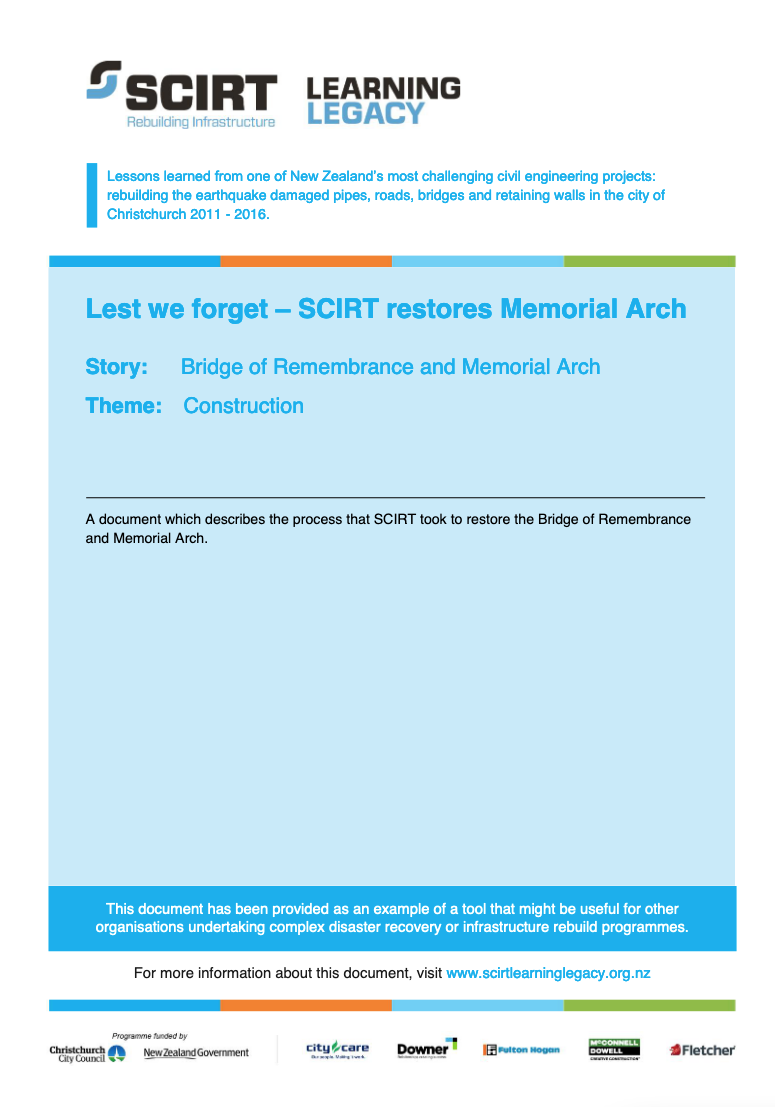 A document which describes the process that SCIRT took to restore the Bridge of Remembrance and Memorial Arch. 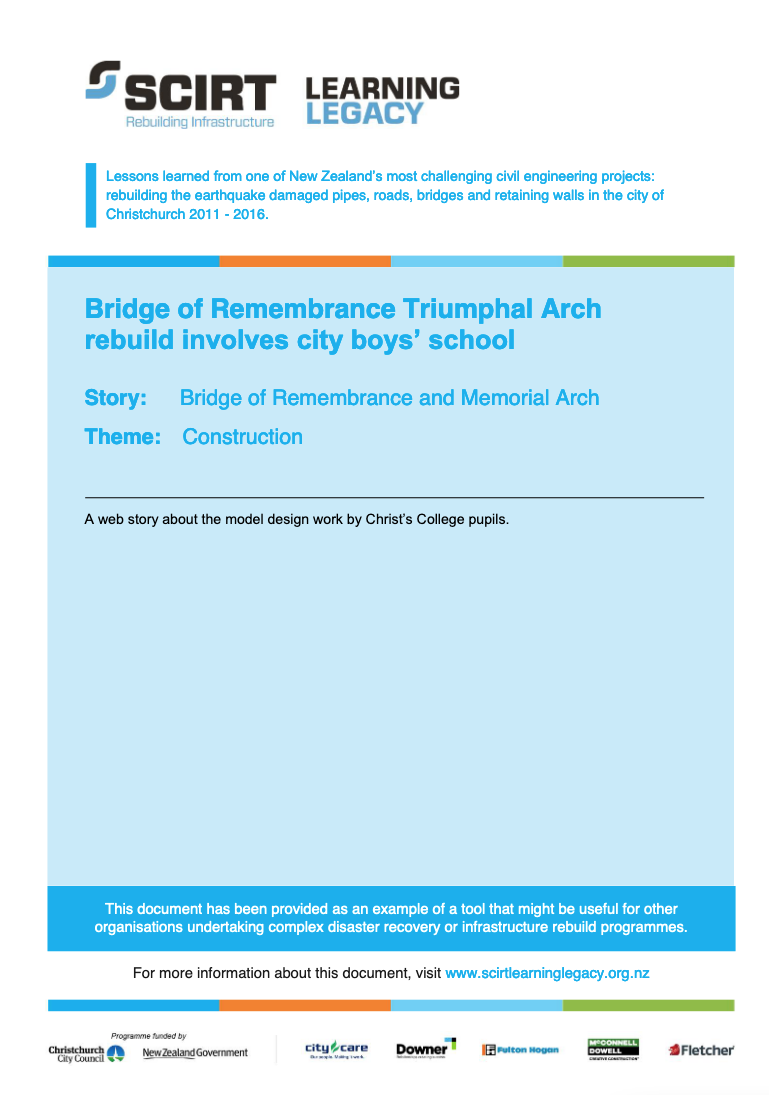 A web story about the model design work by Christ's College pupils.

A web story about a site visit to the Bridge and Arch by local school pupils. 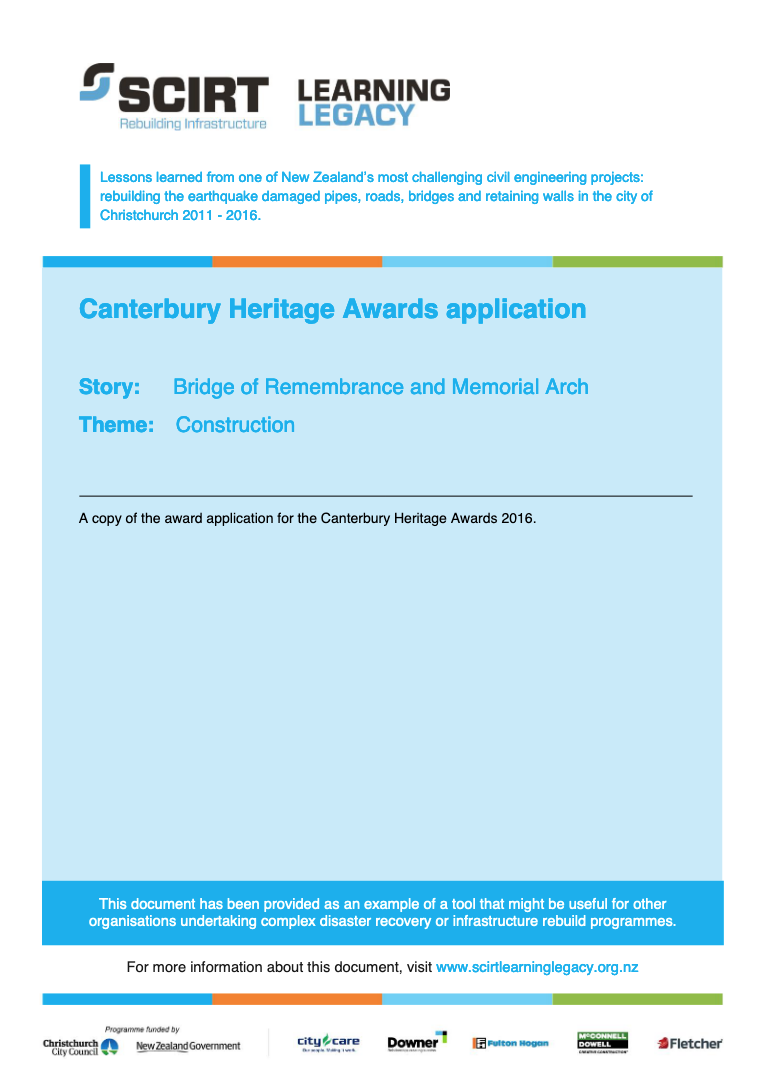 A copy of the award application for the Canterbury Heritage Awards 2016. 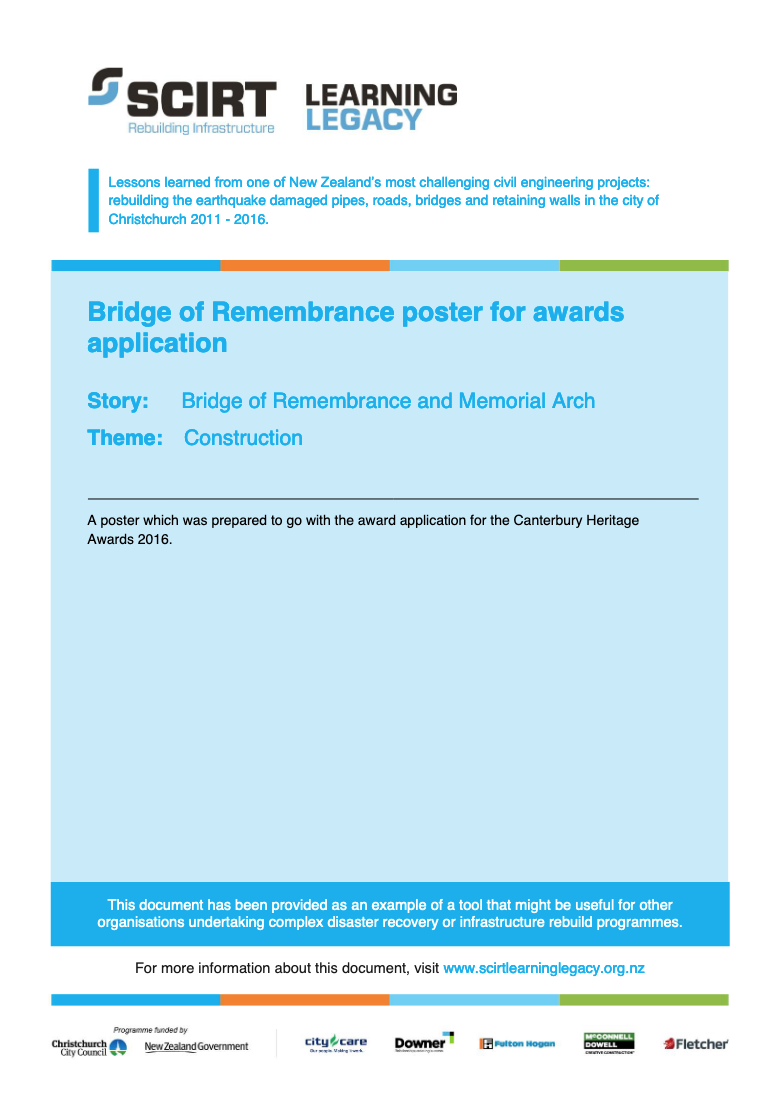 A poster which was prepared to go with the award application for the Canterbury Heritage Awards 2016. Lions roar back into the city centre

A web story about the return of the stone lions to the Memorial Arch.

View: Lions roar back into the city centre 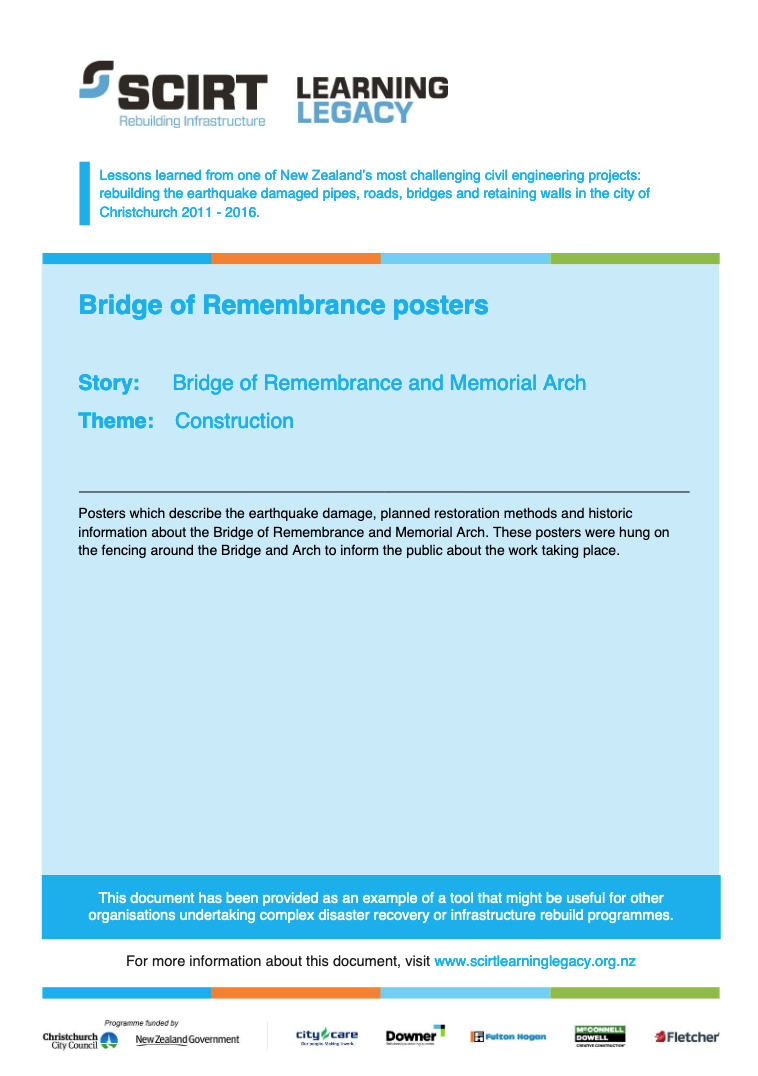 Posters which describe the earthquake damage, planned restoration methods and historic information about the Bridge of Remembrance and Memorial Arch. These posters were hung on the fencing around the Bridge and Arch to inform the public about the work taking place. 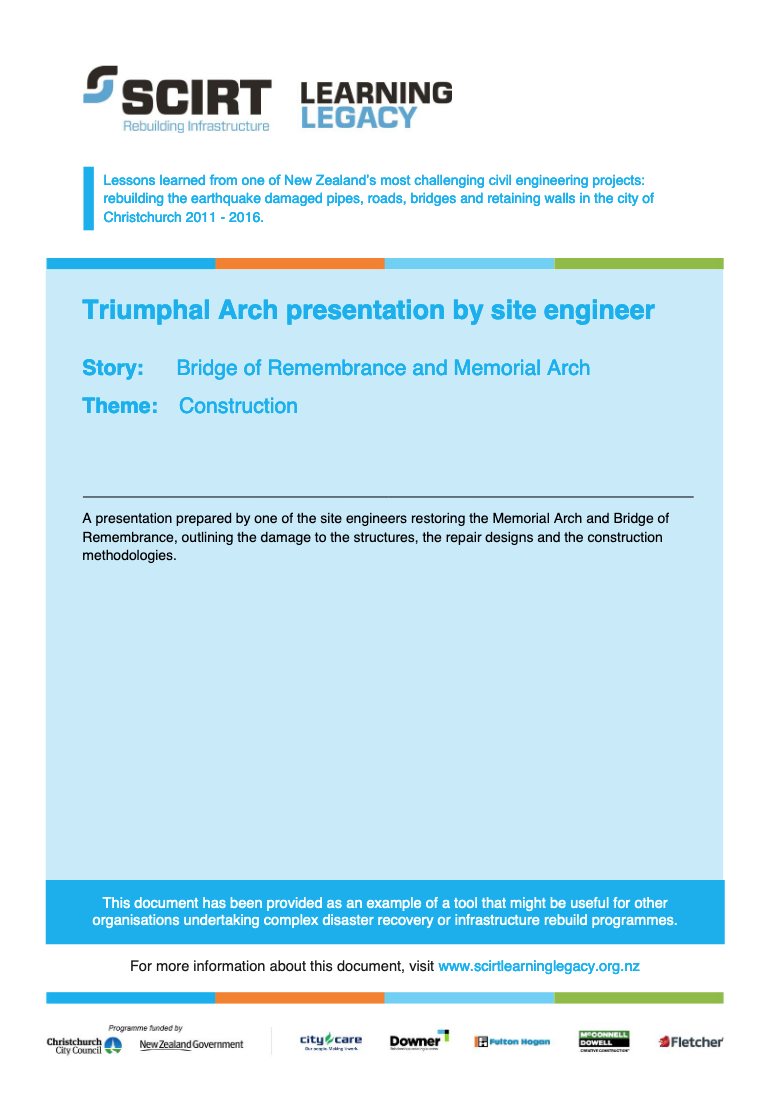 A presentation prepared by one of the site engineers restoring the Memorial Arch and Bridge of Remembrance, outlining the damage to the structures, the repair designs and the construction methodologies. 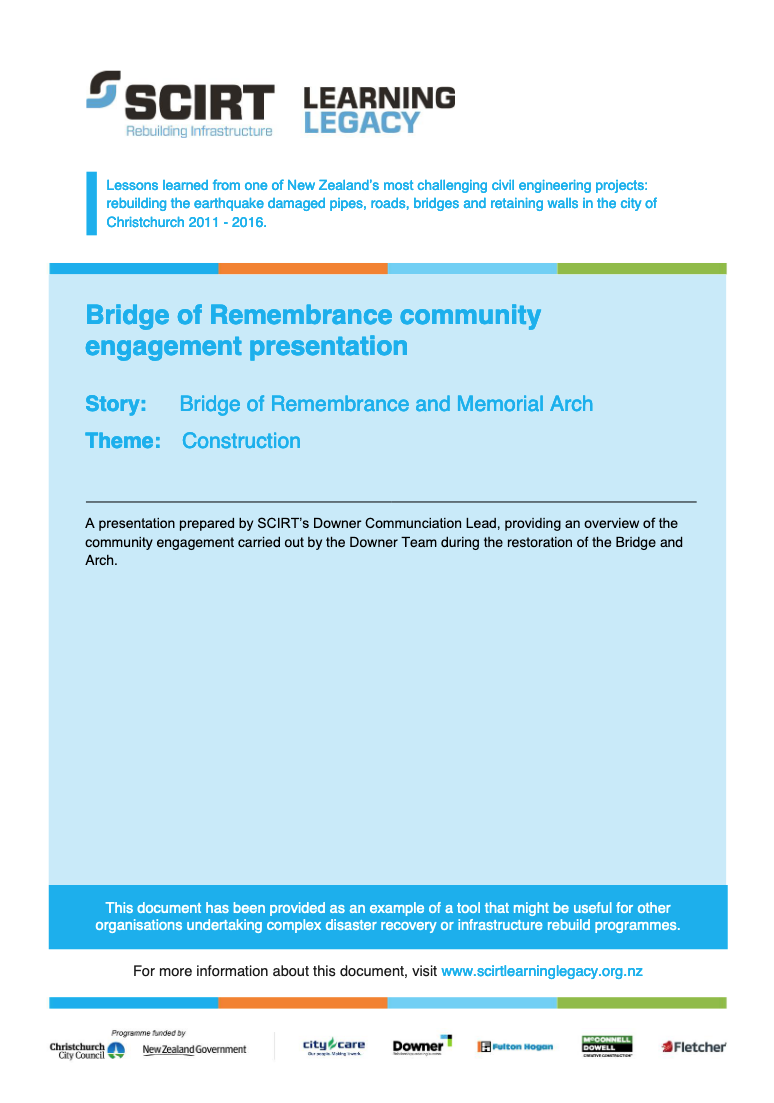 A presentation prepared by SCIRT's Downer Communciation Lead, providing an overview of the community engagement carried out by the Downer Team during the restoration of the Bridge and Arch. 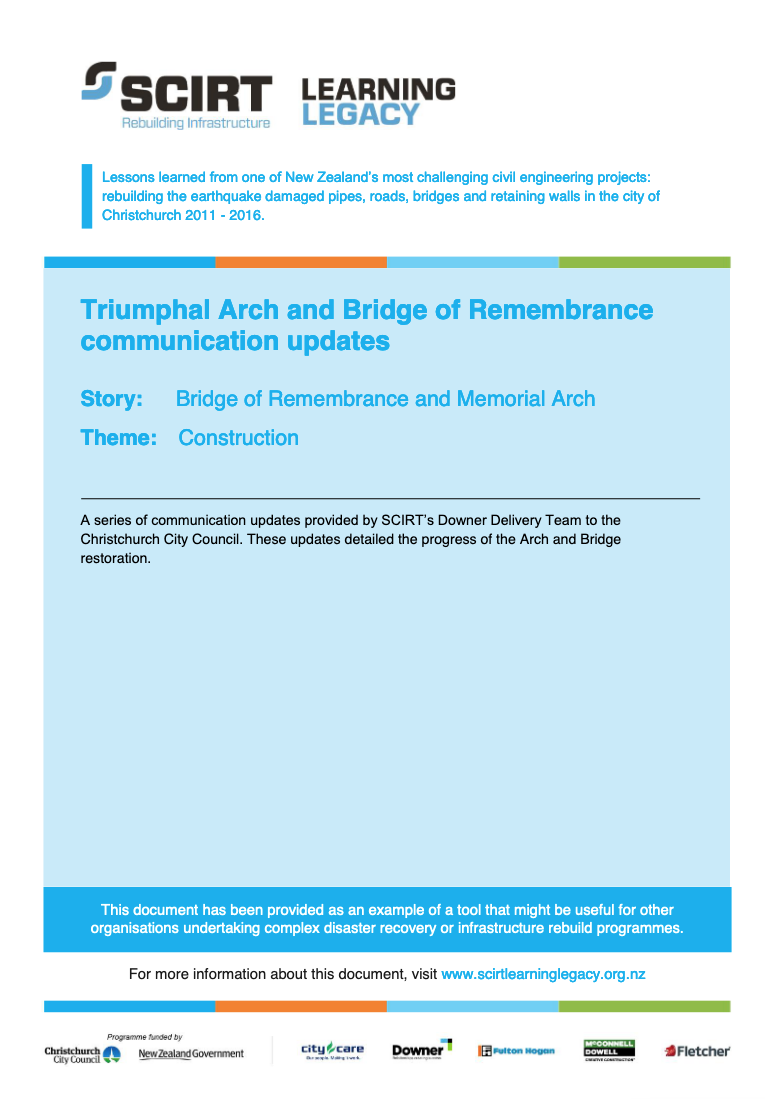 A series of communication updates provided by SCIRT's Downer Delivery Team to the Christchurch City Council. These updates detailed the progress of the Arch and Bridge restoration. The updates were produced between 28 June 2013 and 8 September 2015. 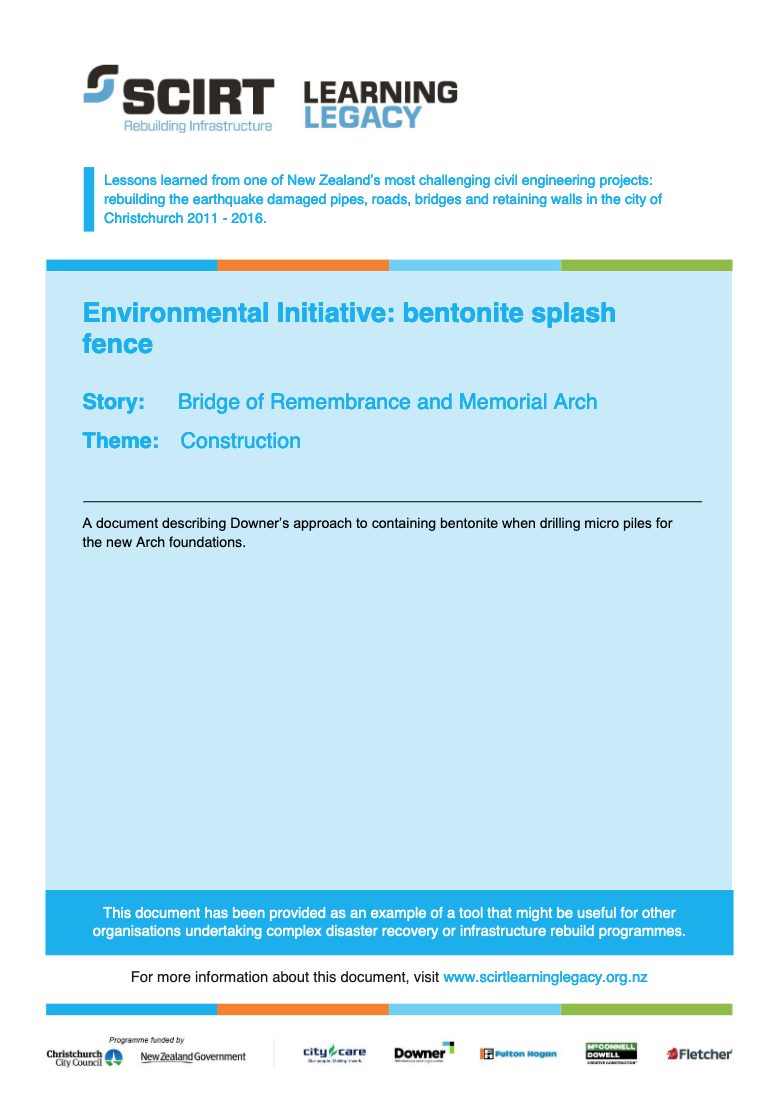 A document describing Downer's planned approach for neutralising the high pH of any potential bentonite or grout discharge into the Avon river. 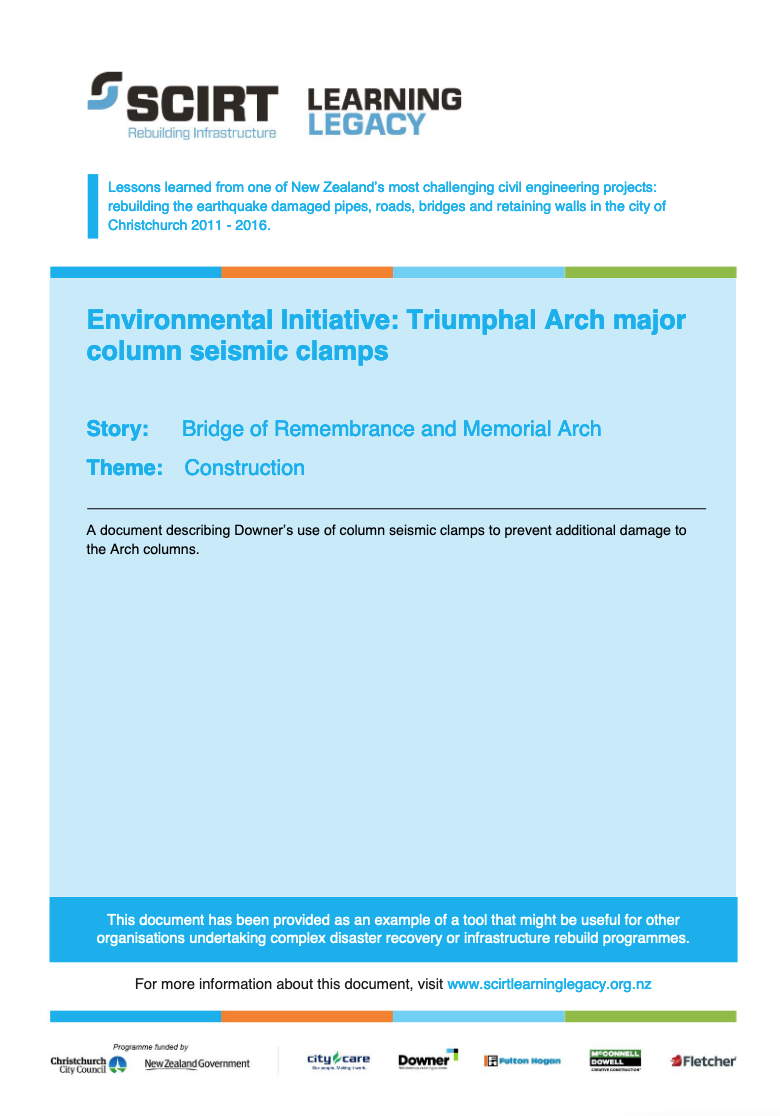 A document describing Downer's use of column seismic clamps to prevent additional damage to the Arch columns. Safety Initiative: Use of a remotely operated hydraulic jaw crusher 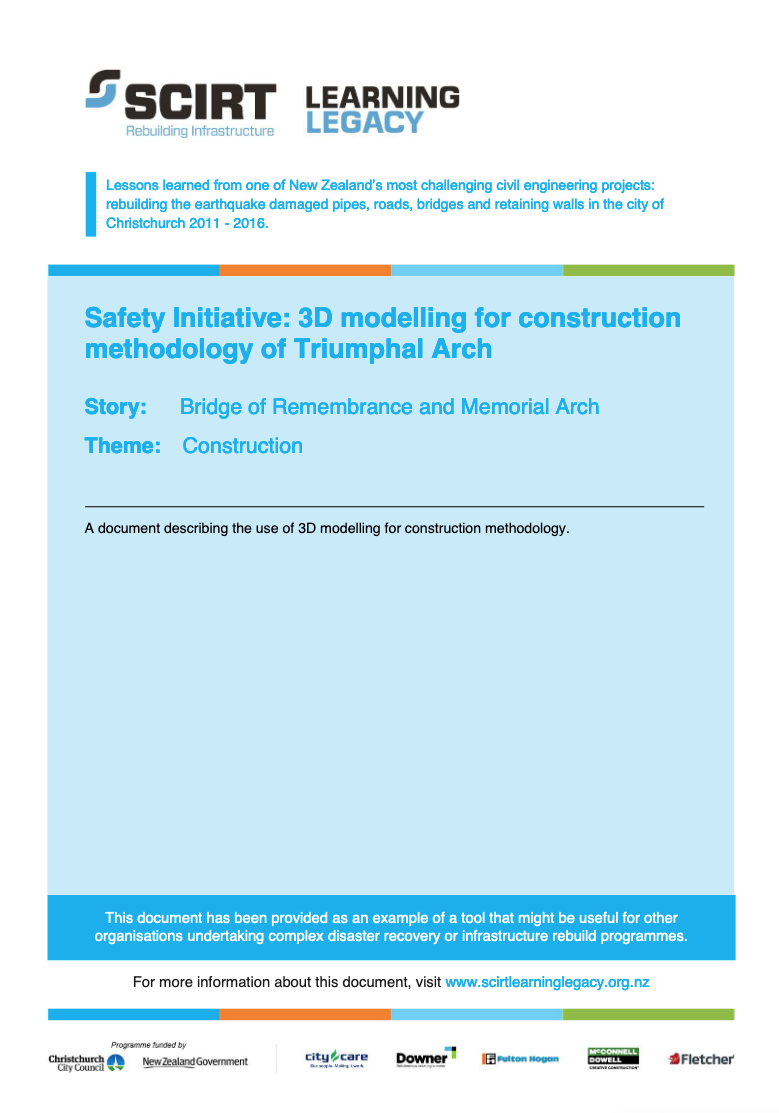 A document describing the use of 3D modelling for construction methodology. 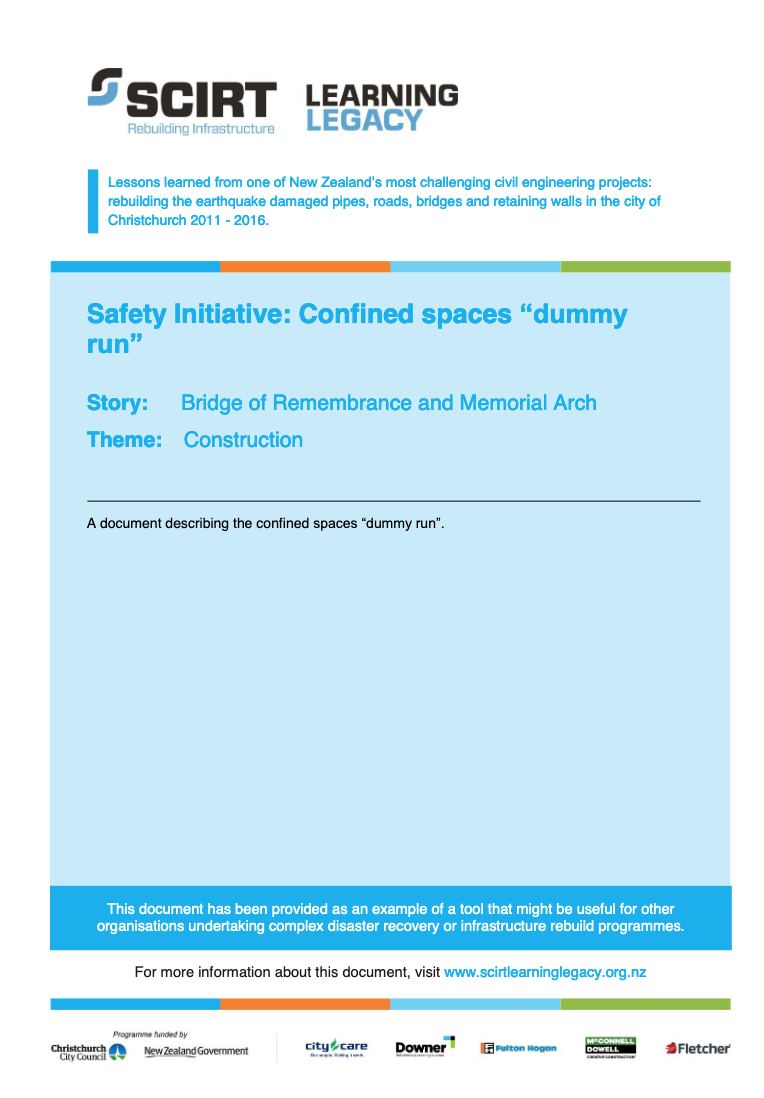 A document describing the early warning system to alert team members of ground and structural movement at the Arch. A paper presented at the New Zealand Concrete Industry Conference 2015 about the design and construction challenges faced when strengthening the Memorial Arch.