At 12.51 pm on February 22, 2011, a high-intensity earthquake emanating from under the Port Hills of Christchurch pounded the city.

Across the dry slopes, the damage was immense as the reverberations were felt far and wide. Among the most hard-hit was the all-important Huntsbury Reservoir. Water drained from the shattered 35,000-cubic-metre storage basin, disappearing into the cracked hills.

Built in 1952, the reservoir was badly battered. A reinforced concrete structure – measuring 77.4 metres by 63m – with a 7.25m water depth, the roof was overlaid with soil and grassed, and the walls ranged from fully buried to exposed, cut into a sloping site.

Responsibility for much of the damage lay with an undiscovered “shear zone” under the reservoir. As a result, not only was the main storage facility out of operation, there was extensive damage to the pump station.

Complicating repairs was the shear zone. Geological probes utilised boreholes to confirm the surprise find. An inspection of the borehole material revealed interfaces where rock-to-rock faces had slid across each other. It was estimated that the last shear zone movement occurred 15,000 years ago.

Two trapezoidal plan-shaped reservoirs were built either side of the shear zone.

The existing perimeter walls remained, while the roof column supports were reused.

The roof slab was designed to allow a crane to operate on the surface during construction. It was overlaid with a fibreglass-reinforced PVC sheet membrane.

In a paper on post-earthquake work on the reservoir, contractors Beca and Fulton Hogan and the Christchurch City Council detailed the damage, including “a broken inlet/outlet pipe flanged connection, extensive dislocation and cracking of floor slabs, cracking of the roof slab and some movement at wall joints adjacent to the corners of the structure”.

However, the associated pump station was “damaged beyond repair”.

A nearby inspection revealed other issues. The inlet/outlet pipe traversed an adjacent road, Huntsbury Avenue, via a tunnel. A tunnel check revealed collapsed roof sections.

The inlet/outlet pipe proved to be intact. The void between the pipe and the tunnel was filled with foam concrete, protecting the pipe from any falling roof material and cushioning it from further movement.

Teamwork, prompt decision-making, astute risk assessment and community consultation were key elements in the success of the project. However, the need for reservoir resilience and the attention to design details were paramount. 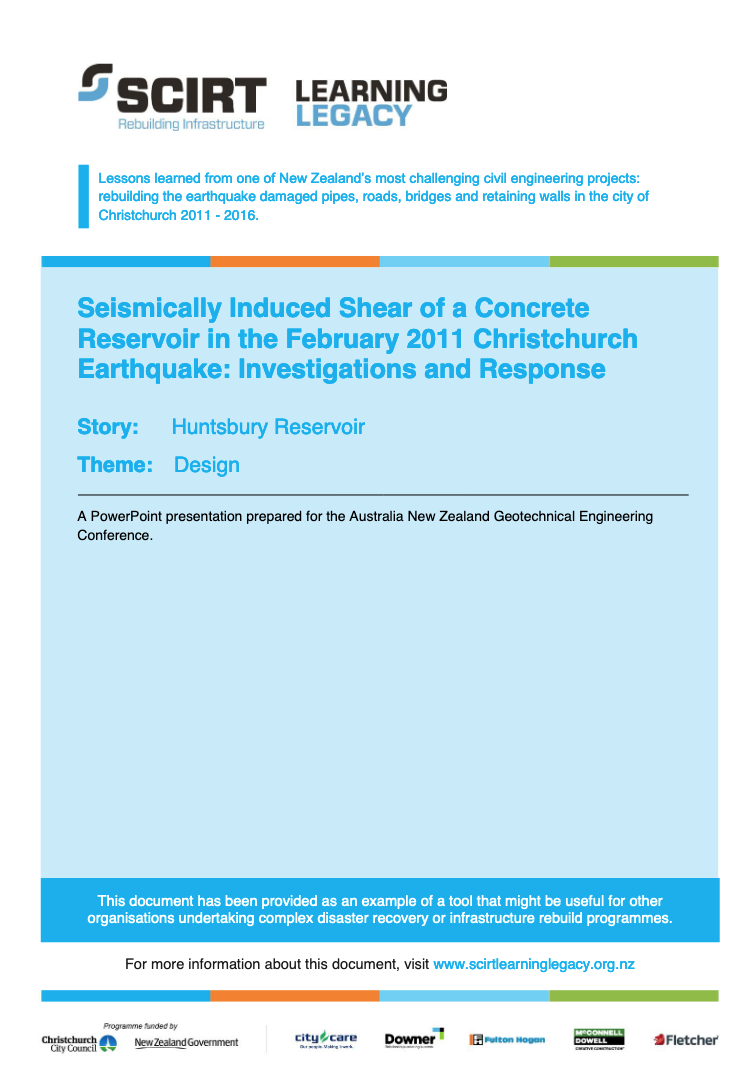 Seismically Induced Shear of a Concrete Reservoir in the February 2011 Christchurch Earthquake: Investigations and Response

A pdf copy of a PowerPoint presentation prepared for the Australia New Zealand Geotechnical Engineering Conference.

View: Seismically Induced Shear of a Concrete Reservoir in the February 2011 Christchurch Earthquake: Investigations and Response 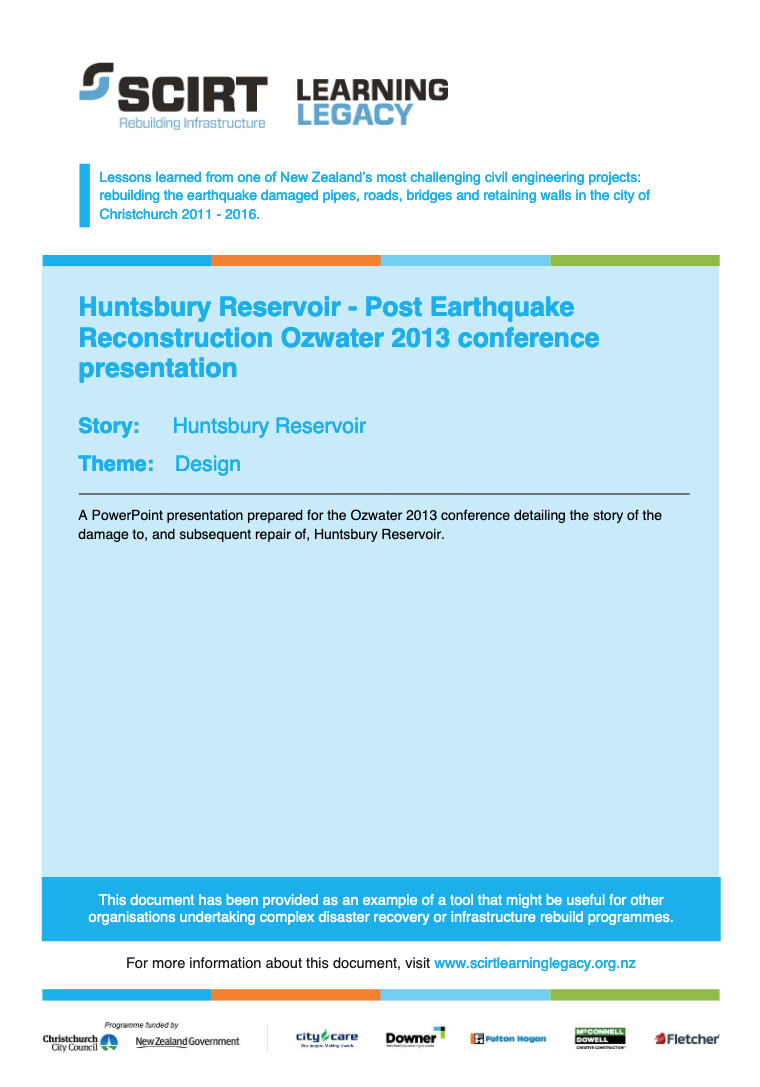 A pdf copy of a PowerPoint presentation prepared for the Ozwater 2013 conference detailing the story of the damage to, and subsequent repair of, Huntsbury Reservoir.

A paper prepared for the Ozwater 2013 conference detailing the story of the damage to, and subsequent repair of, Huntsbury Reservoir. 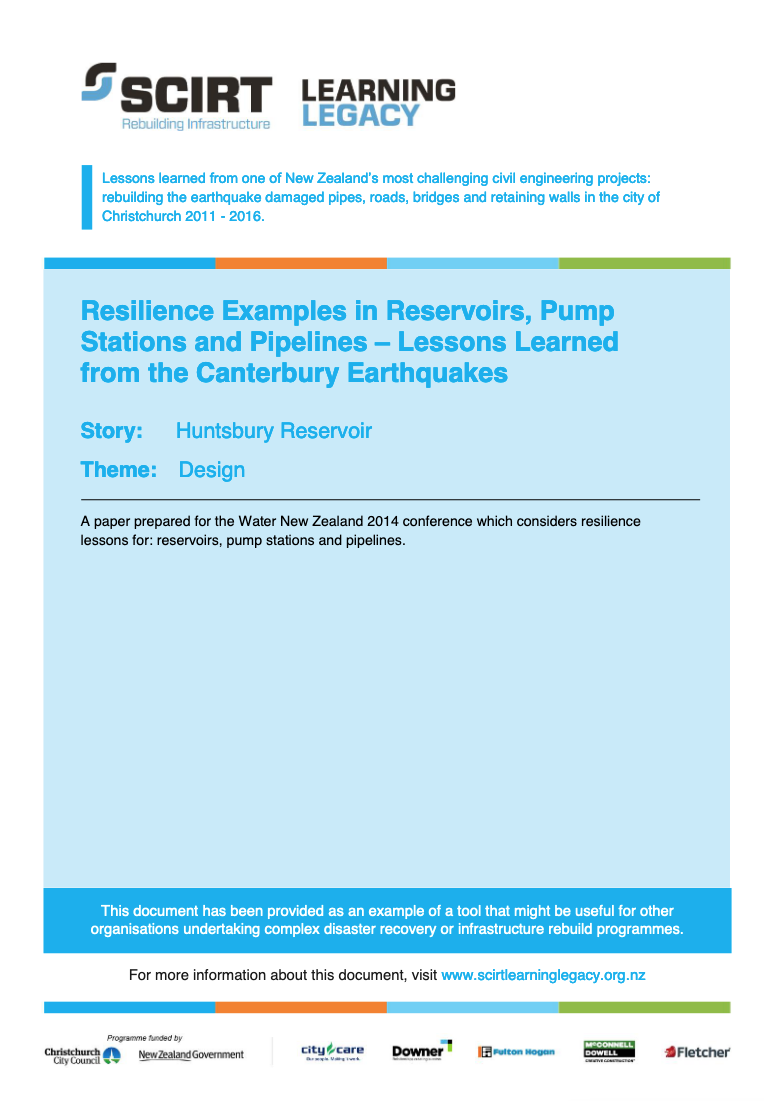 A paper prepared for the Water New Zealand 2014 conference which considers resilience lessons for reservoirs, pump stations and pipelines. 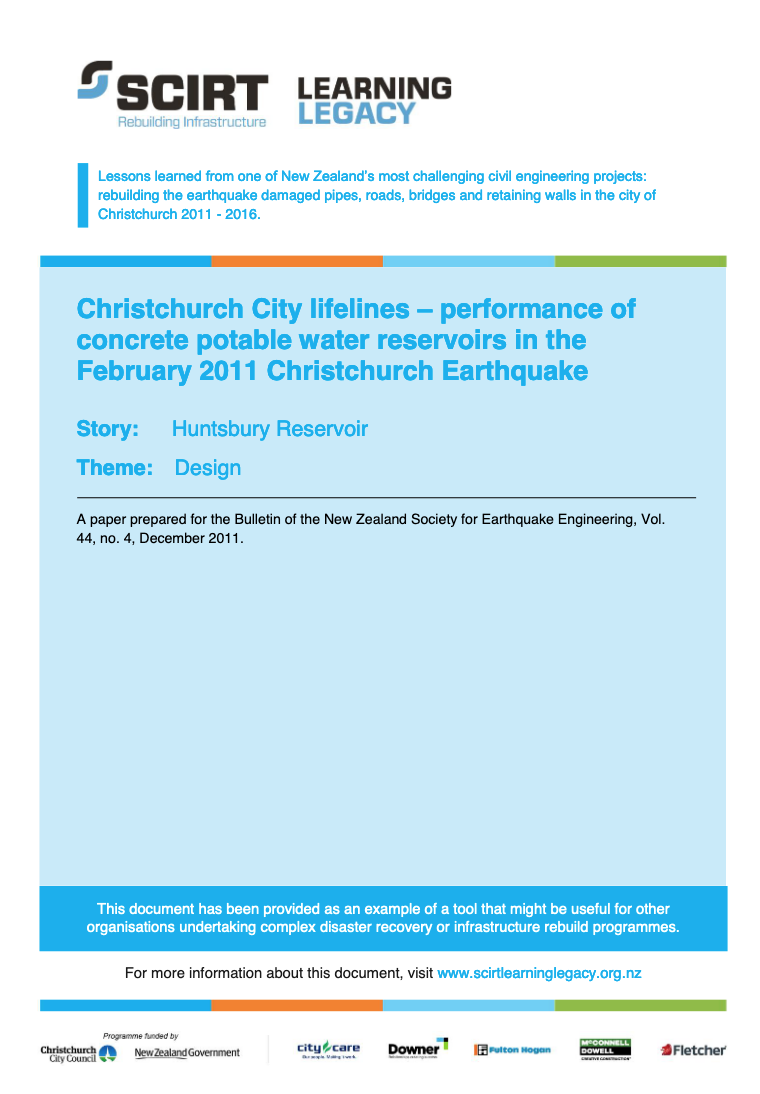 A paper prepared for the Bulletin of the New Zealand Society for Earthquake Engineering, Vol. 44, no. 4, December 2011.