SCIRT created a range of fact sheets describing its role and work. These accessible, cost-effective tools were displayed in public places and taken to community meetings.

As part of its initial engagement with the community, it was important to introduce SCIRT so people understood what it would be doing, where and why. This was vital because the work would be widespread and disruptive.

Understandably, prior to the earthquakes, most people had given little thought to the importance of the horizontal infrastructure that kept the city functioning, and were now most interested in its operation and the repair programme.

Ten fact sheets describing SCIRT’s work in plain language were created at the start of the programme. These pocket-sized brochures could be taken to meetings and displayed in purpose-built stands at council service centres, libraries and earthquake agency information centres etc. While primarily designed for print, the information was replicated on the SCIRT website.

They were a cost-effective way of providing information via a visual and accessible channel, particularly for those without easy web access. Each fact sheet focused on a core SCIRT element, including its commitment to the community, as described in the title:

Recognising the diversity of the Christchurch community, material was translated into Korean, Samoan and Chinese. These sheets were placed in an information display stand at the Migrant Centre. SCIRT was recognised for this initiative by the Race Relations Commissioner for “Contributing to supporting the maintenance and development of harmonious race relations”. 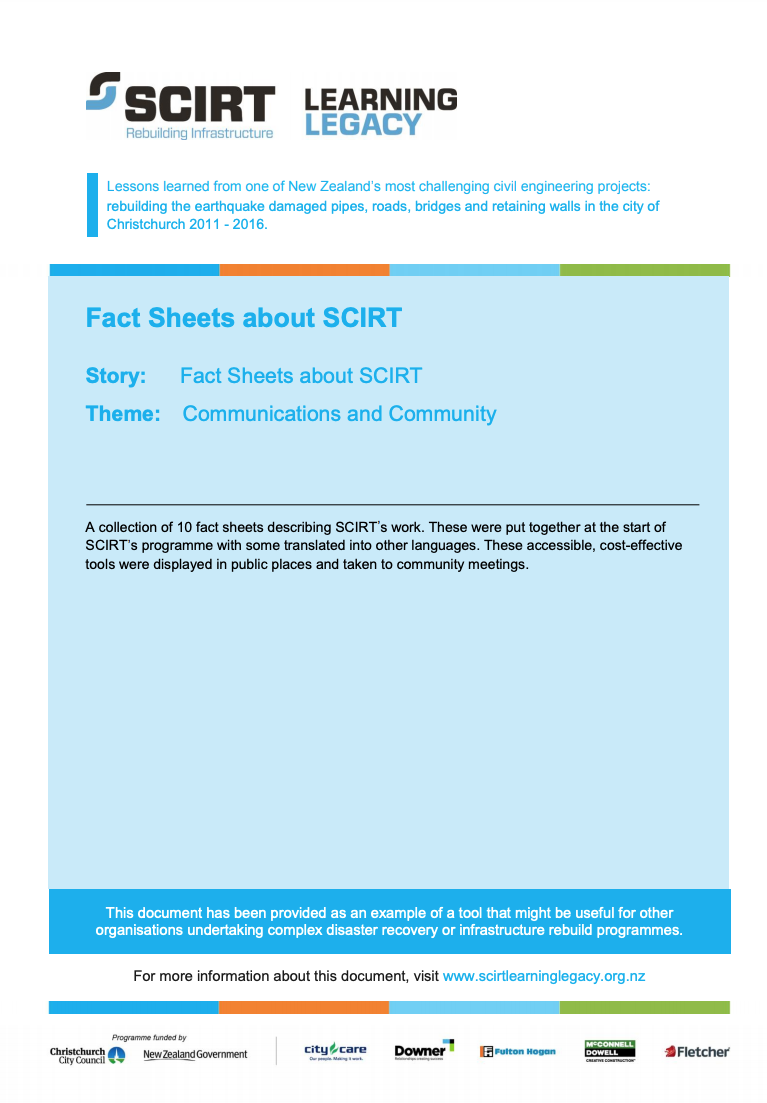 A collection of 10 fact sheets describing SCIRT's work. These were put together at the start of SCIRT's programme in 2012, with some translated into other languages. These accessible, cost-effective tools were displayed in public places and taken to community meetings.