This suite of documents provided a comprehensive programme management tool for the definition, prioritisation, design and construction of interdependent projects within a central city environment. The documents were developed and used for an intensive post-disaster rebuild but had other applications with similar operating parameters.

At the outset of the rebuild programme in 2011, SCIRT identified nearly $140 million of infrastructure work to be completed in central Christchurch. While accounting for less than 10 per cent of total SCIRT work, the central city presented significant challenges.

SCIRT worked closely with other organisations, including CCDU (the Central City Development Unit, part of CERA, the Canterbury Earthquake Recovery Authority), and the Christchurch City Council to develop a series of plans to anticipate and manage specific issues.

More than 70 per cent of central city buildings were to be demolished and there was extensive damage to pipes (particularly earthenware) and bridges.

There was an opportunity to largely complete the horizontal rebuild (infrastructure) before the vertical rebuild (buildings) gathered momentum. Wastewater and stormwater pipes, water supply, utilities, roads, and bridges all had to be repaired or rebuilt.

However, not all of the infrastructure design could be completed until the Central City Recovery Plan and blueprints were developed, in 2012. The blueprint also included a number of “anchor projects”, such as a convention centre and a sports stadium. Although some of the anchor projects were delayed or revised in scale, SCIRT had to plan its work to accommodate them.

Army cordons controlled access to the central city from February 22, 2011 to June 30, 2013, which limited SCIRT’s access to this area. After that date, SCIRT continued repair work in a much busier environment as people, cars, and buses returned to the city centre.

Maintaining the transport network was vital to support the city’s economy; therefore the pace of reconstruction had to be matched to the capacity of the city to cope with the volume of work. Communicating with remaining businesses in the central city while intense activity went on around them was essential for their livelihoods.

Other issues were traffic disruption, parking, and site access. The number of crews rebuilding a variety of services in a relatively small space presented a logistical challenge.

The following material and reports provide an overview of the structure which enabled comprehensive programme management of the central city rebuild. 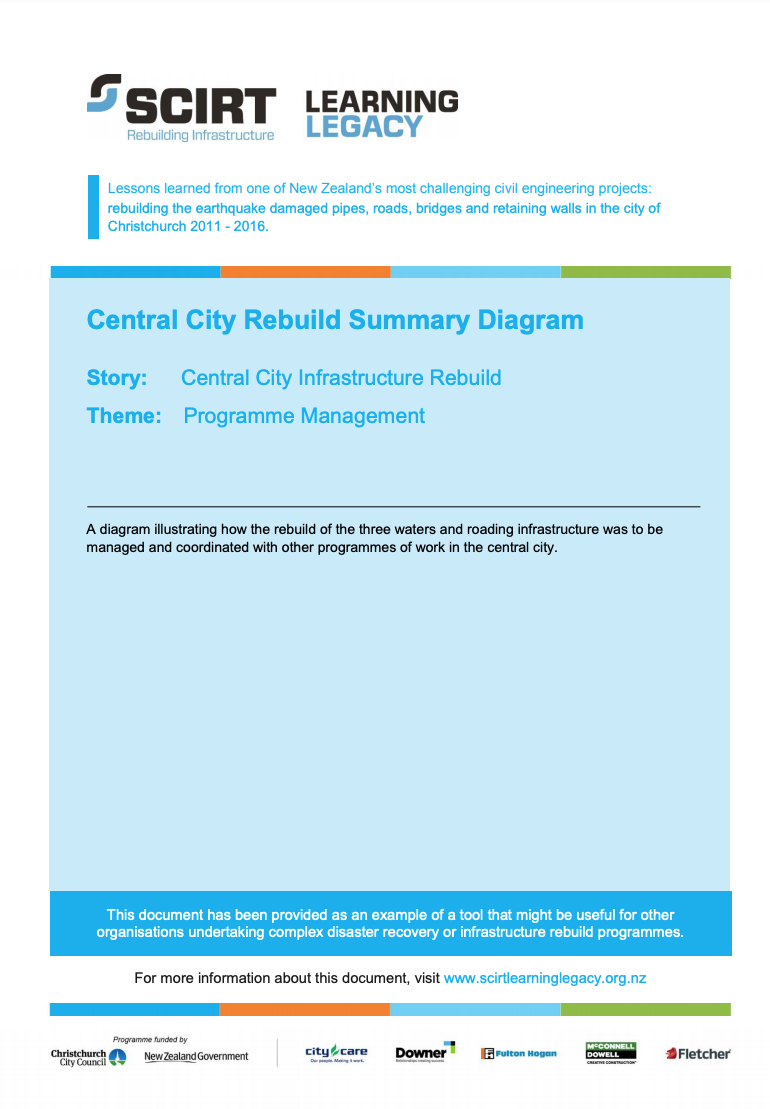 A diagram illustrating how the rebuild of the three waters and roading infrastructure was to be managed and coordinated with other programmes of work in the central city. 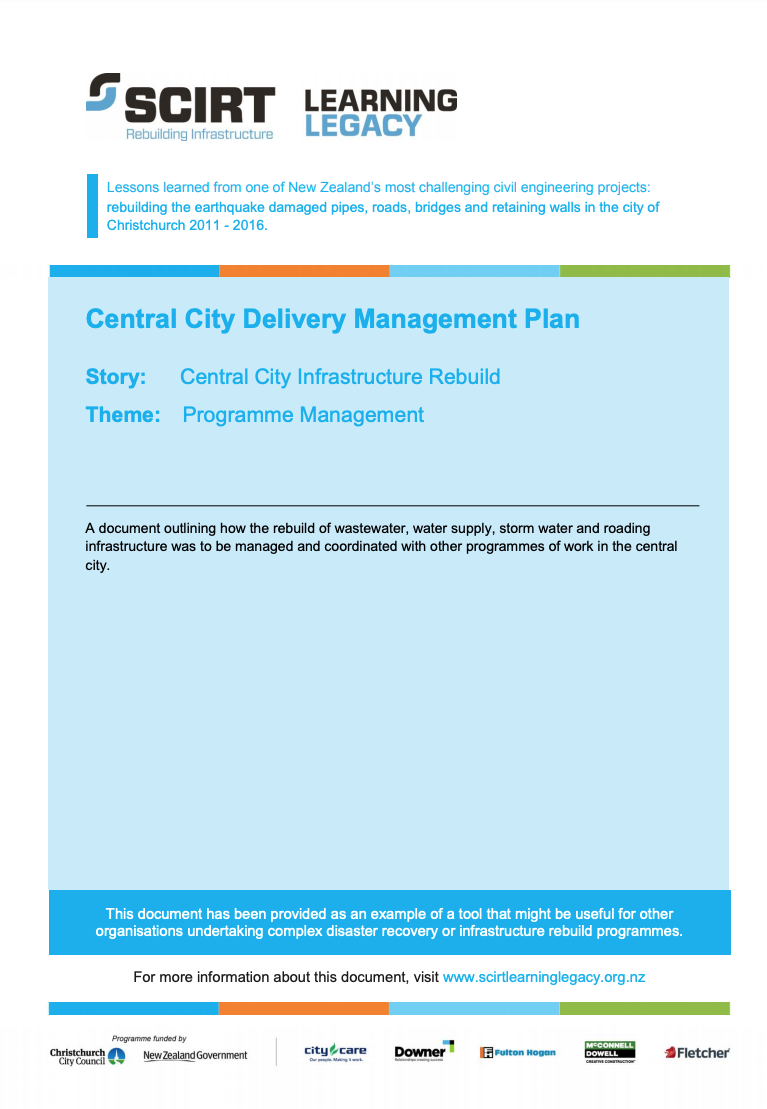 A document outlining how the rebuild of wastewater, water supply, storm water and roading infrastructure was to be managed and coordinated with other programmes of work in the central city. 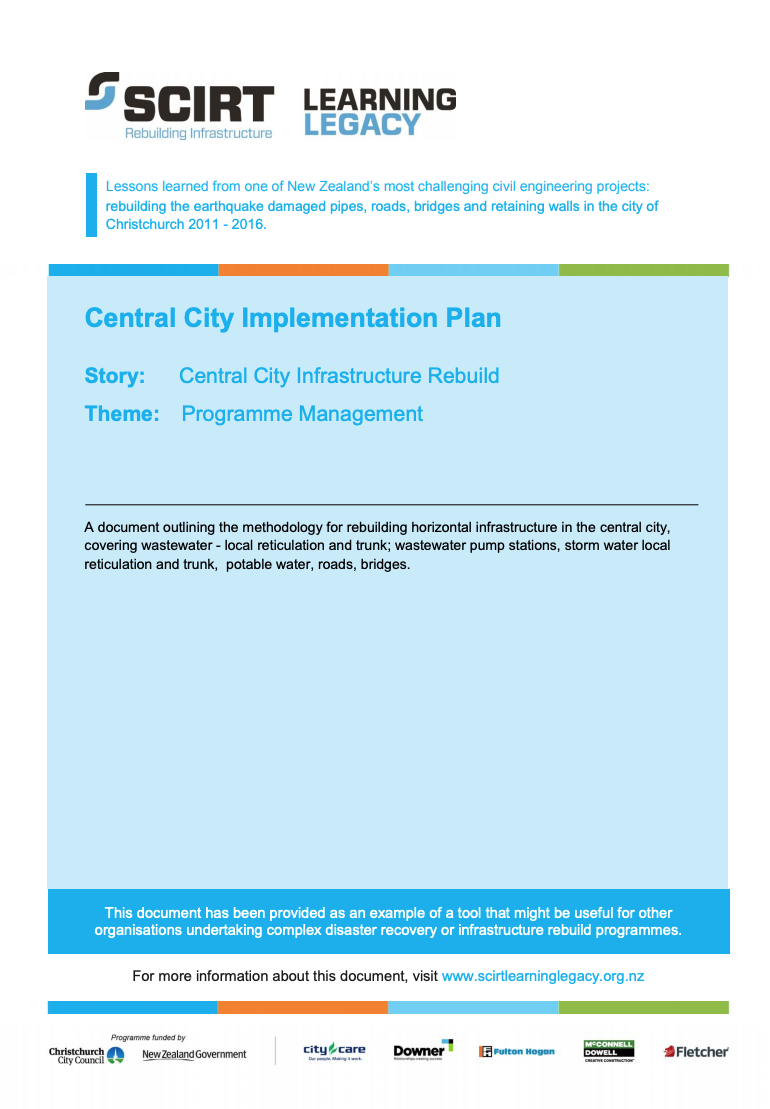 A document created in 2011, demonstrating the design parameters for the rebuild of wastewater, storm water, water supply and roading in the central city. 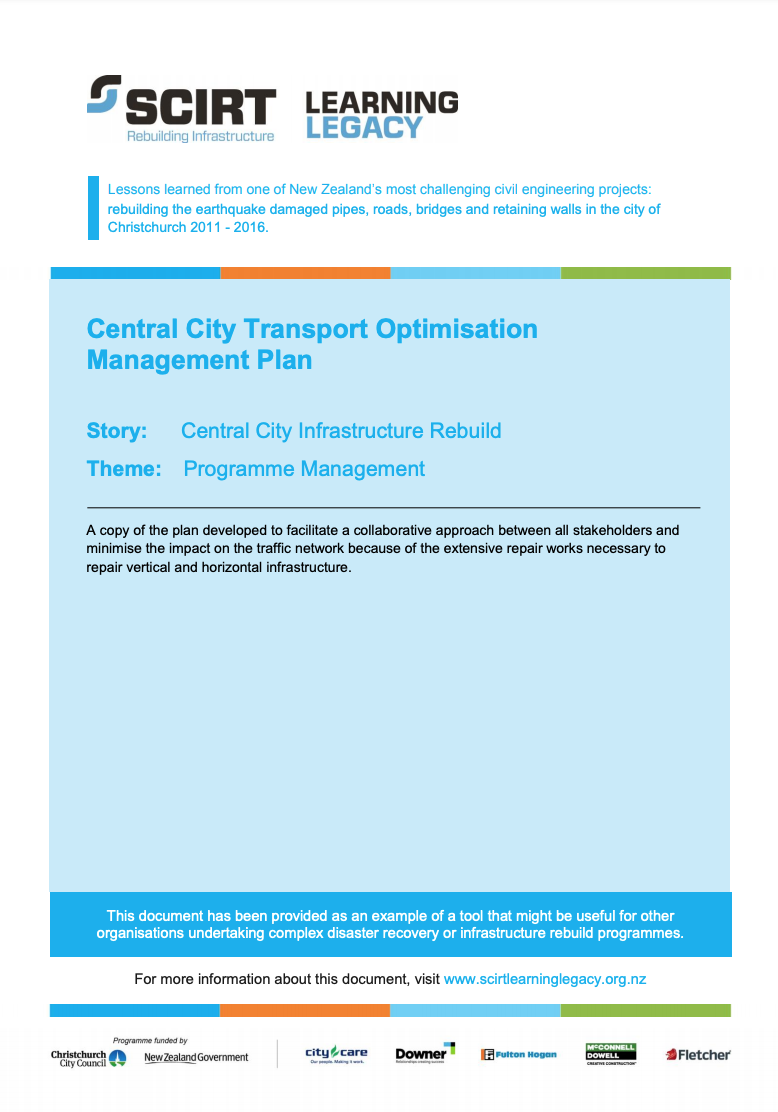 A copy of the plan developed in 2011 to facilitate a collaborative approach between all stakeholders and minimise the impact on the traffic network, because of the extensive repair works necessary to repair vertical and horizontal infrastructure. 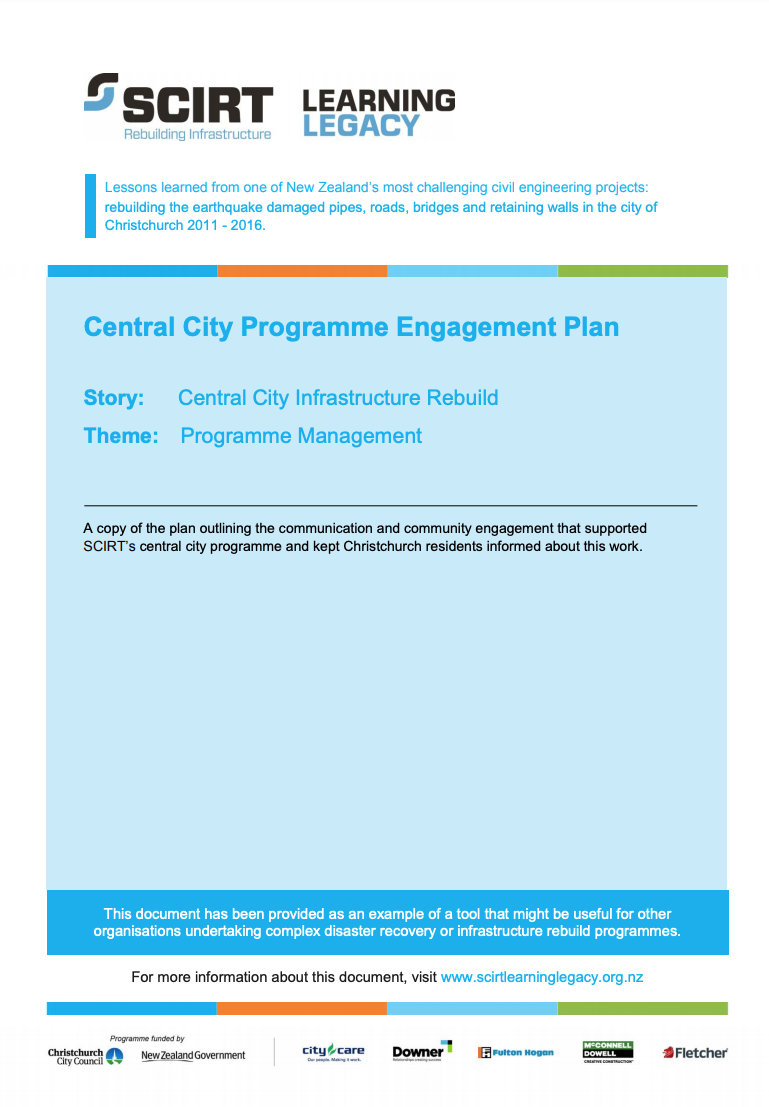 A copy of the plan, developed in 2011, outlining the communication and community engagement that supported SCIRT's central city programme and kept Christchurch residents informed about this work. 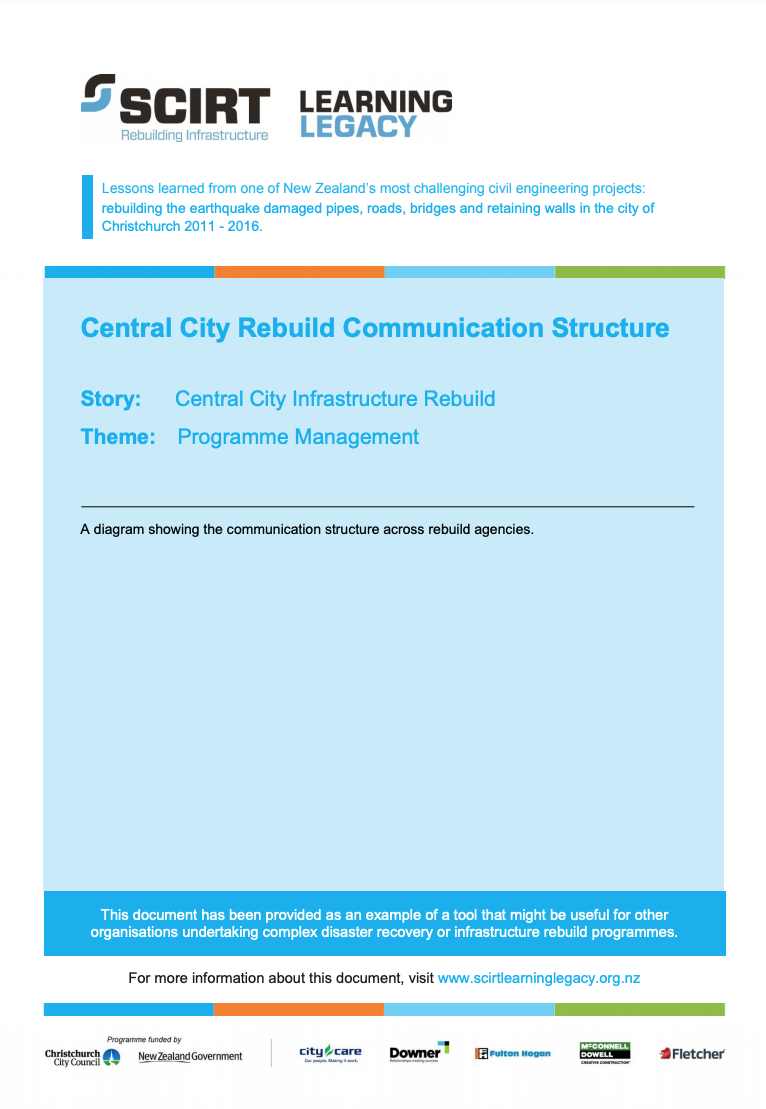 A diagram created in 2011, showing the communication structure across rebuild agencies. 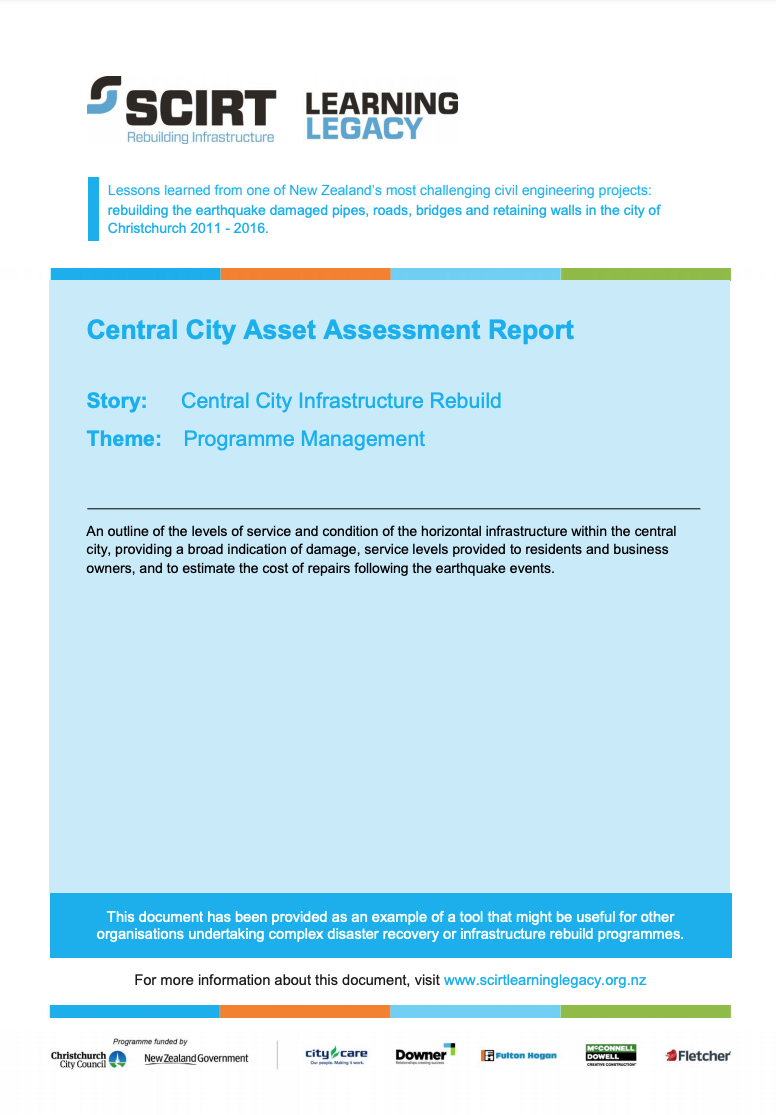 An outline, created in 2011, of the levels of service and condition of the horizontal infrastructure within the central city, providing a broad indication of damage, service levels provided to residents and business owners, and used to estimate the cost of repairs following the earthquake events. 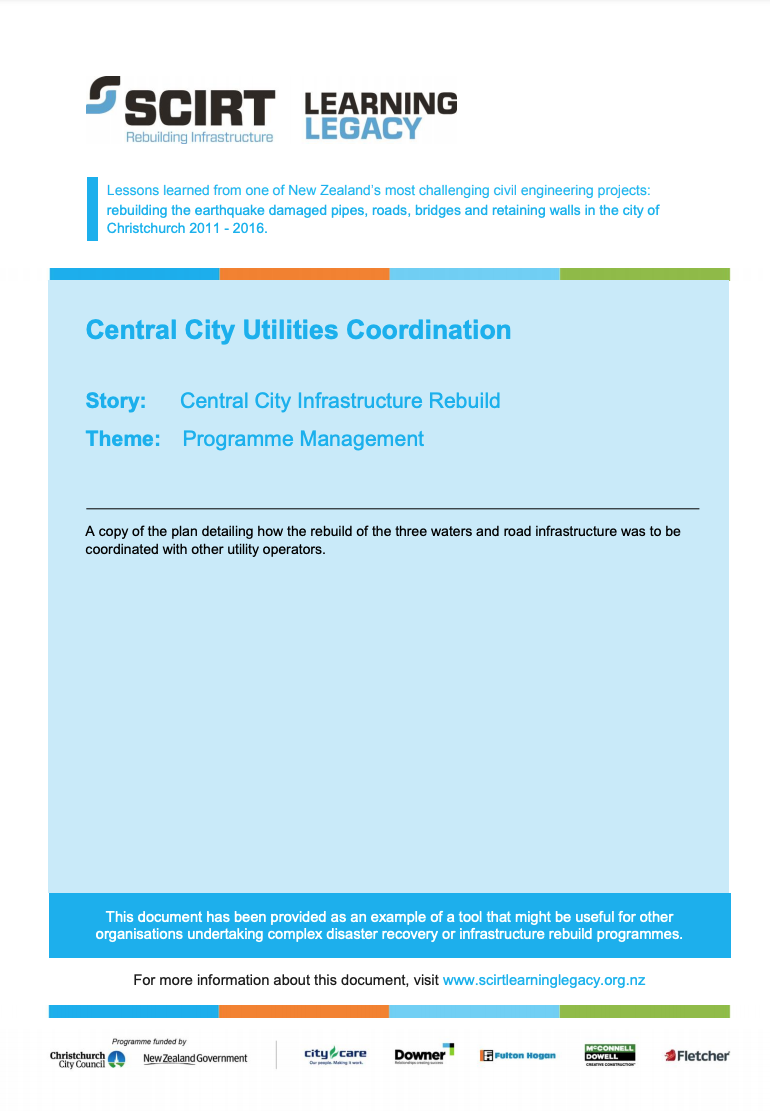 A copy of the plan, created in 2011, detailing how the rebuild of the three waters and road infrastructure was to be coordinated with other utility operators. 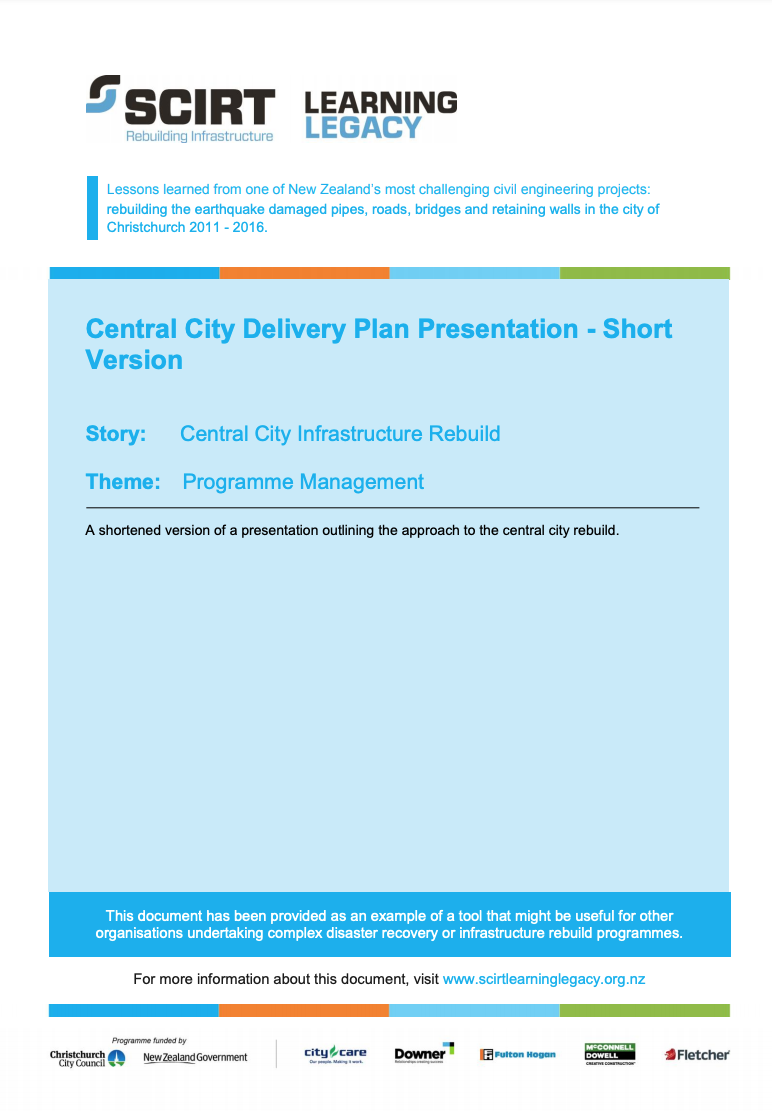 A shortened version of a presentation created in 2011, outlining the approach to the central city rebuild. 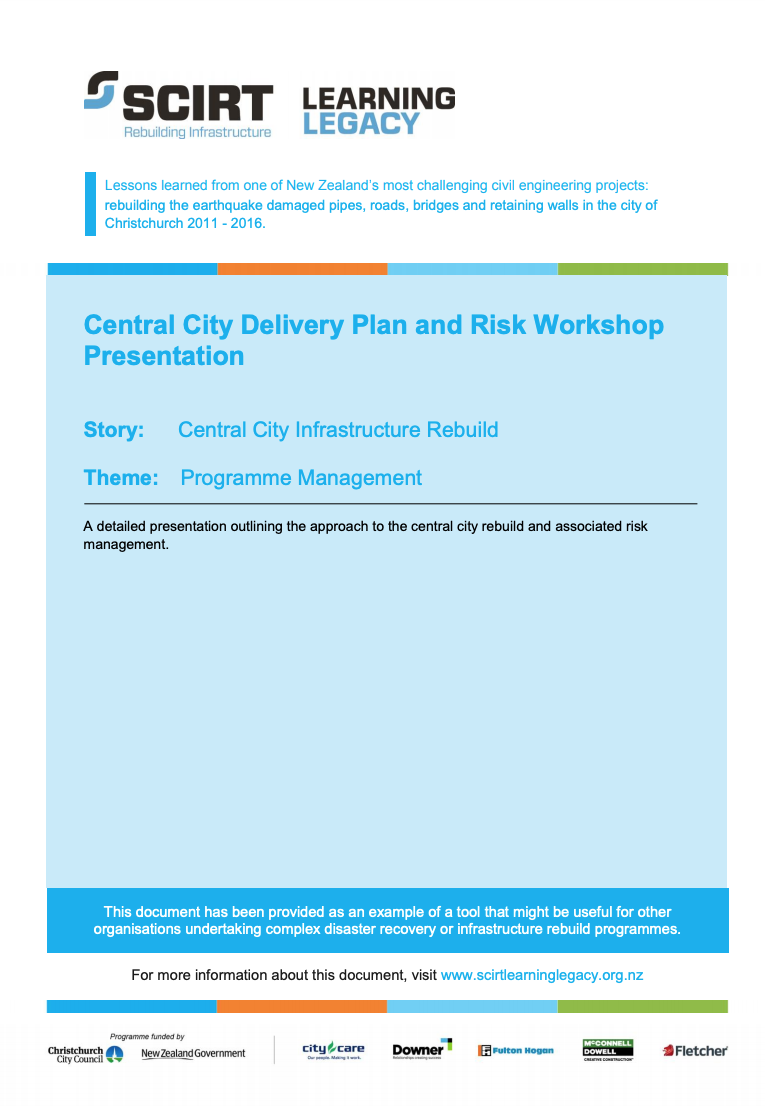 A detailed presentation created in 2011, outlining the approach to the central city rebuild and associated risk management. 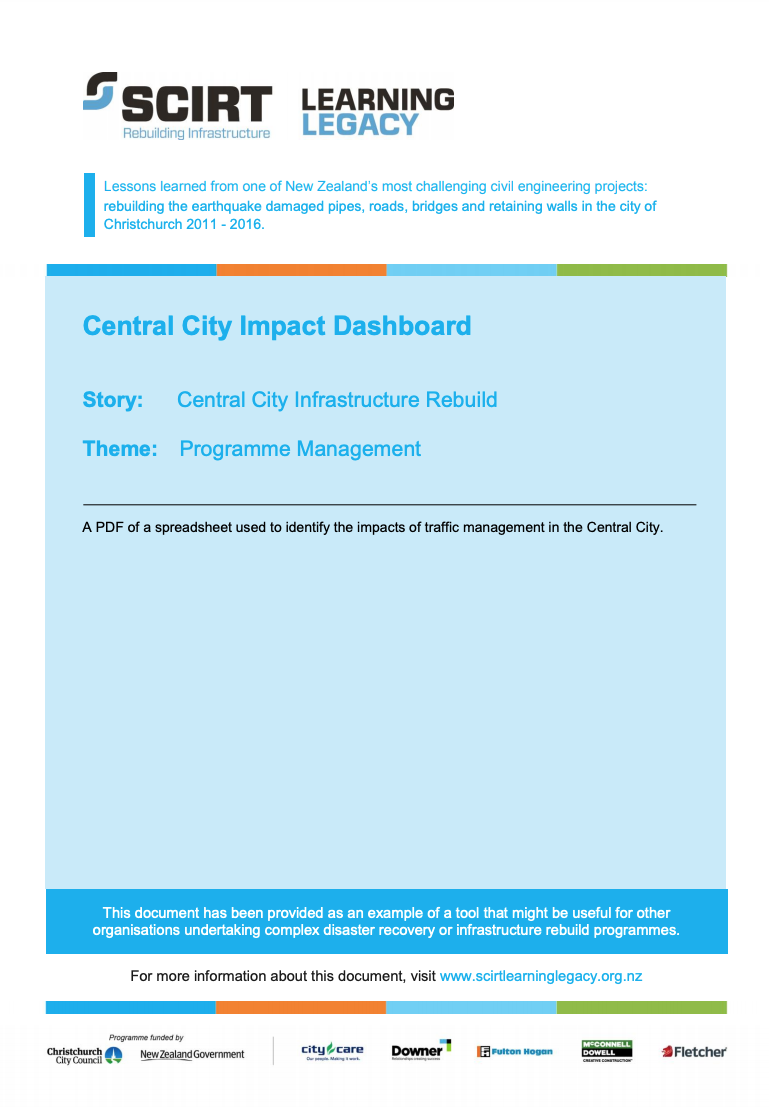 A PDF copy of a spreadsheet used to identify the impacts of traffic management in the central city.