SCIRT developed a Design Guideline for an Automated Flushing Siphon System to reduce the frequency of blockages in the wastewater network caused by pipe dips and flat grades.

The Christchurch wastewater network consists of pipes laid at typically shallow grades in the flat regions, and pipes laid at steeper grades in the Port Hills. Historically, these shallow grades led to blockages forming in areas where there were insufficient flows to maintain a free flowing network. These blockages sometimes resulted in problems for residents from blowbacks, the inability to flush toilets, and wastewater overflowing onto private property.

To reduce this risk, the Christchurch City Council installed more than 1600 flush tanks and flush manholes around the city. These chambers were concrete structures, usually located at the head of wastewater pipelines, which contained either a flap valve or a plug to isolate them from the rest of the network. A water supply connection to the chambers was separated from the rest of the water supply system by an air gap separator.

Operation of these chambers was part of the Council’s proactive maintenance regime; the flushing was carried out at set time intervals (approximately every five weeks).

Operation of about 1000 of the flush tanks and flush manholes was discontinued before the 2010 and 2011 earthquakes as part of a water conservation measure. Maintenance cycles in blockage-prone areas were maintained, most notably around malls, to mitigate the build-up of fat deposits within the wastewater network.

Council maintained a list of all the flush tanks and flush manholes and had them surveyed in 2011 and 2012 for operability. This survey revealed a lot of them were in good condition.

The 2010 and 2011 earthquakes created dips along wastewater pipes and reduced some pipe grades. These pipes had an increased risk of blockage, especially where they suffered from low or infrequent flows.

Whereas dips can generally be repaired using a short section of new pipe, restoring flat graded pipes can require relaying hundreds of metres of new pipe and possibly the installation of a lift station. To avoid this extensive relaying of pipes, which structurally may have many years of service left, it was an option to install flushing siphon devices at points around the wastewater network to provide frequent flushing of flat pipes to minimise the risk of blockage and odour emission. The majority of dips within the flushing zone of influence might in turn not need repair.

SCIRT prepared a Design Guideline for an Automated Flushing Siphon System to reduce the frequency of blockages on the wastewater network caused by pipe dips and flat grades. 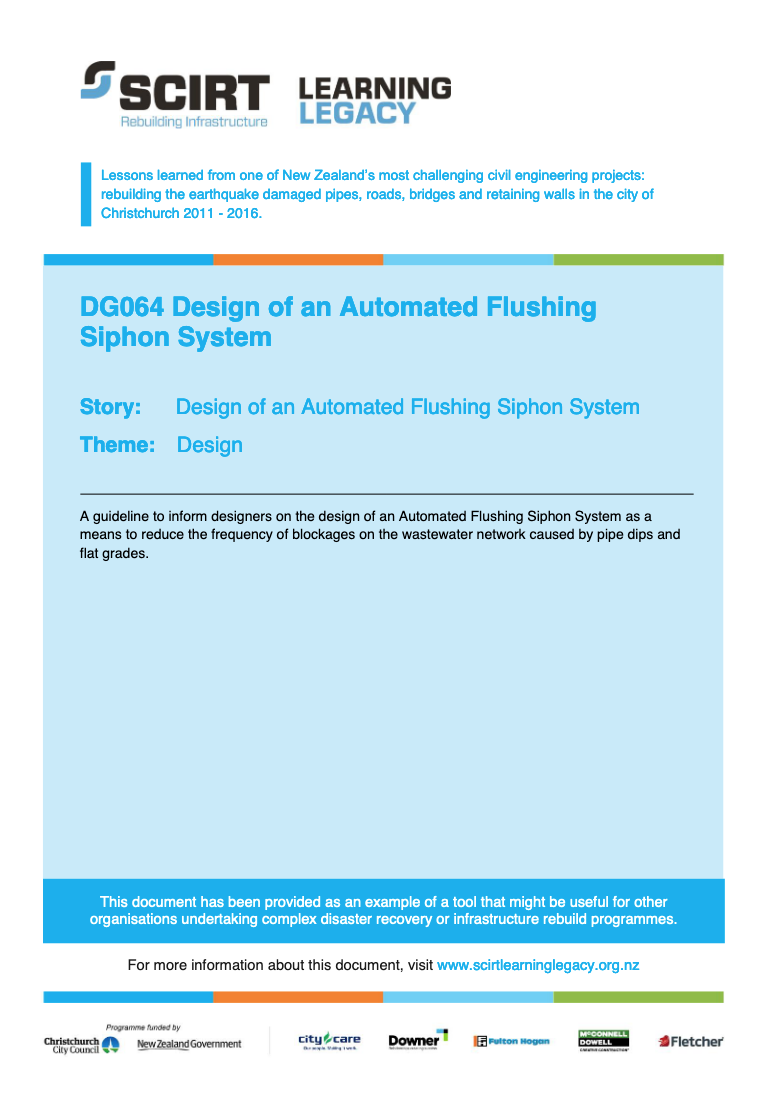 A guideline to inform designers on the design of an Automated Flushing Siphon System as a means to reduce the frequency of blockages on the wastewater network caused by pipe dips and flat grades.