Global Positioning System (GPS) cameras were used throughout the SCIRT programme to take site photos, which were then uploaded and displayed as a layer on the SCIRT GIS (Geographic Information System) Viewer.

At the beginning of SCIRT’s five-year programme, the scale and scope of the damage to Christchurch’s horizontal infrastructure was unknown.

Managing the cost of storage, image quality and easy access to photographs were key factors in the decision to use GPS cameras to take site photos. SCIRT’s Information Technology (IT) team identified the best GPS cameras for the task.

SCIRT’s Geographic Information System (GIS) team created and documented a process (see attached manual) to make photographs available to everyone who needed them via SCIRT’s Viewer. Initially, a bookable calendar system was created for team members to use the cameras when visiting sites. Soon, a further process was developed utilising personal mobile phones. After initial testing, the GIS team’s manual was amended to enable the use of photos taken with mobile phones, and extended to incorporate a description to be displayed with each photo.

The upload process was made as simple as possible. Site photos were placed in a specific file location on the internal server – following a set folder structure – with a process to extract the coordinates from the photos, attach a description, resize, make three copies and then update on the SCIRT Viewer.

All photos were accessible via the SCIRT Viewer as a point layer, with details of the project/phase and description attached (all of which were searchable). This proved to be very useful when designers were reviewing asset condition information to develop repair solutions, particularly after heavy rainfall. Photos showed the scale of asset damage, and the extent and flow of storm water.

Photos without GPS coordinates were made available on the home page of the SCIRT Viewer. These could be scrolled through, similar to Windows Explorer. A separate process was created to upload asset photos taken without GPS cameras to the Viewer. These were linked to asset locations by means of a photo-naming convention (see attachment).

The key learnings for other organisations are: 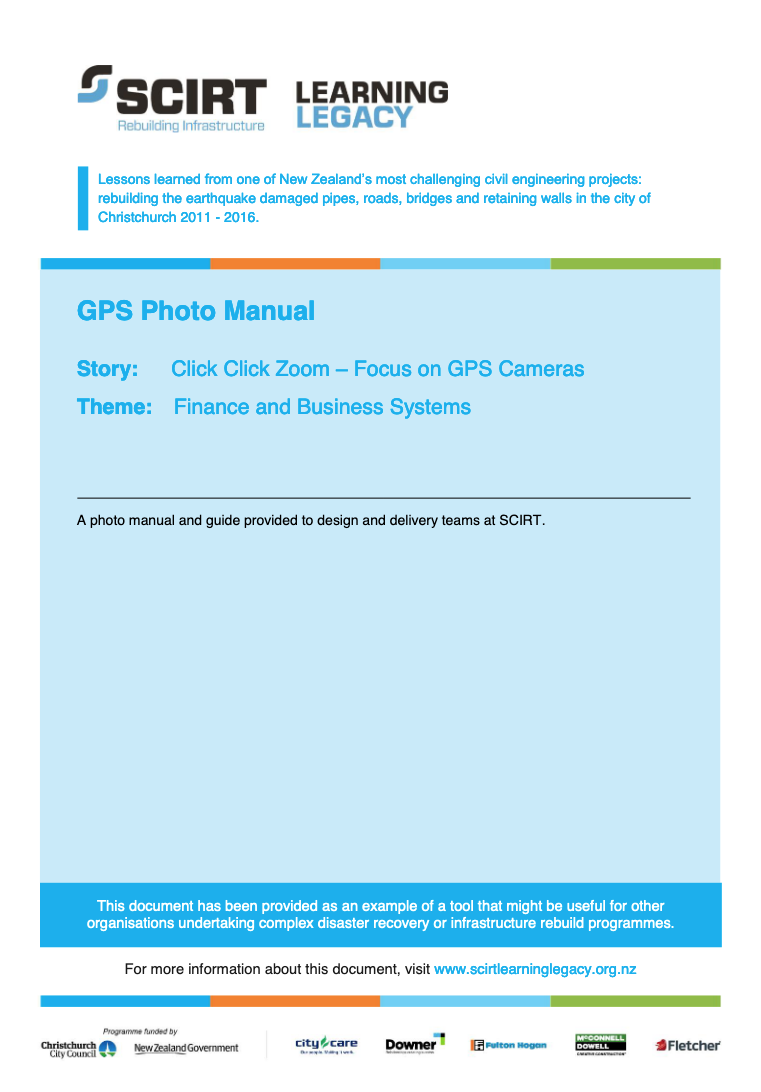 Photo manual and guide provided to design and delivery teams at SCIRT.