A guideline to inform designers of the pipe profilometer operation, including requesting profile surveys, standards, and the assessment of the survey results.

However, one limitation of CCTV was its relative inability to accurately quantify pipe dips with the precision demanded by the Council or Industry Specifications.

The pipe profilometer programme for measuring dips in gravity wastewater pipes was an innovative use of technology from the geotechnical engineering industry for assessing the amount of vertical pipe movement in areas that had experienced significant differential settlement.

A trial was undertaken of different profile measuring technologies and the one found most suitable was Geotechnics Ltd’s “profilometer”, typically inspecting to an accuracy of +/- 5mm. Launched and controlled from a custom built twin axle trailer, the profilometer crew and traffic management requirements were similar to that for CCTV.

The Geotechnics Pipe Monitoring Team created their own trailer from which to run their profilometer operation, and won a Bill Perry safety award in recognition for the number of safety hazards the trailer eliminated: http://strongerchristchurch.govt.nz/article/underground-investigators-br…

A profilometer, or level sonde, was pulled through the pipe (typically from a downstream manhole to an upstream manhole), recording the elevation of the sonde in relation to a base station at specified intervals, typically one metre. The resulting graph, or “profile”, was shown as a pipe longsection displaying pipe inverts at 1 m intervals.

A Designer Guideline was created to inform SCIRT designers of the operation and how to interpret and use its outputs within the design framework of the Infrastructure Rebuild Technical Standard and Guidelines (IRTSG). 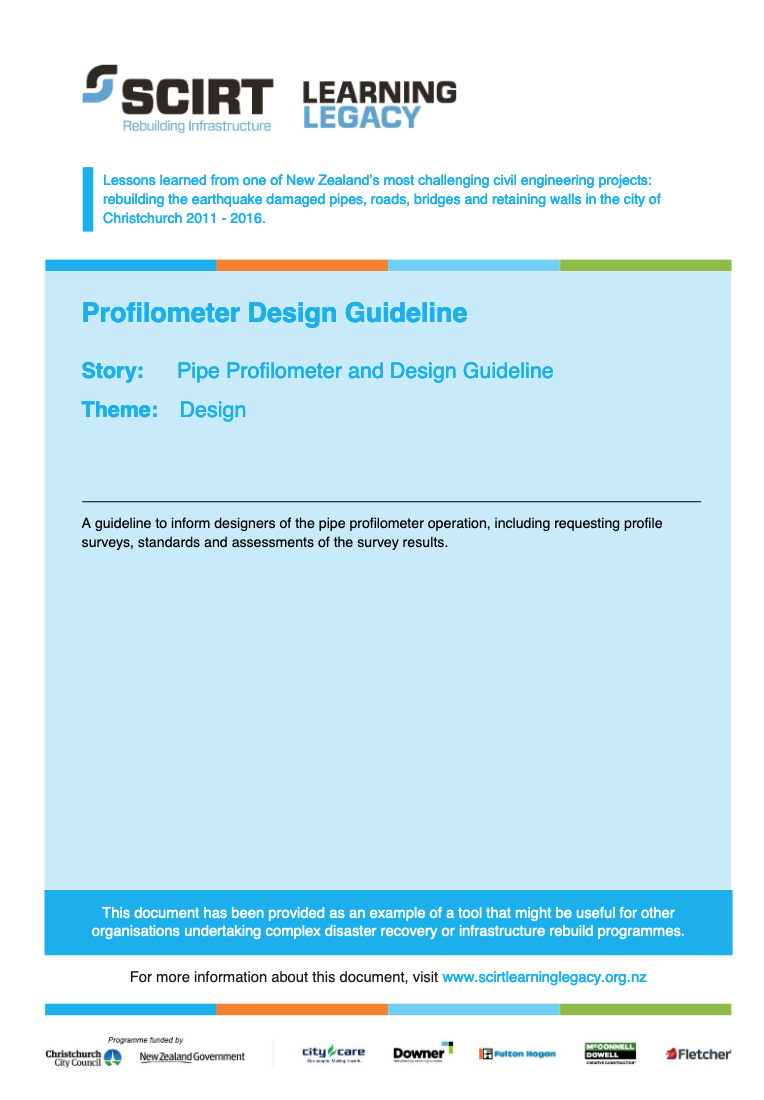 A guideline to inform designers of the pipe profilometer operation, including requesting profile surveys, standards and assessments of the survey results.