How separate design teams from previously competing organisations came together and operated in a collaborative way. The consultancy organisations involved in SCIRT’s design team were recognised for their collaboration with an ACENZ Innovate NZ Award of Excellence in 2016.

Design services were not part of the formal SCIRT Alliance, but were engaged separately from various consultancy organisations as well as the Christchurch City Council.

In July 2011, four Lead Design Organisations (LDOs) were selected. The decision on four teams would allow for competition and collaboration within the overall design team.

A Professional Services Advisory Group (PSAG) was created by representatives from the consultancy organisations, and in September 2011 established guiding principles.

The goal was agreed as: “Pride in the legacy we are creating in our people, our profession and our city.”

A key challenge for the team was the need to establish what to design and how to design it. For example, where to design for ground liquefaction; how to approach resiliency in design; how robust should the designs be and how repairable should they be; and how many design earthquake events should a solution withstand?

The solution was to quickly develop world-leading expertise in resilient design and risk management through collaboration and sharing of knowledge and expertise.

Another challenge related to everyone working with the same design tools regardless of what their home organisation was used to using. Particular training and development went into the GIS and 12d design tools.

From the outset in September 2011, it was made clear that, while collaboration was encouraged, the teams were expected to compete with each other, with the best performing teams ultimately receiving a greater share of the overall scope of work.

The collective response, however, was to put aside any notion of commercial competition between the teams. Teams agreed to focus their combined attention solely on establishing the best solution for the people of Christchurch.

At its peak the design team consisted of 176 designers, each month delivering concept and detailed designs for projects with a combined construction estimate more than $50 million.

The below award submission gives further details into how the design team supporting SCIRT was formed, and how successful design delivery was achieved. 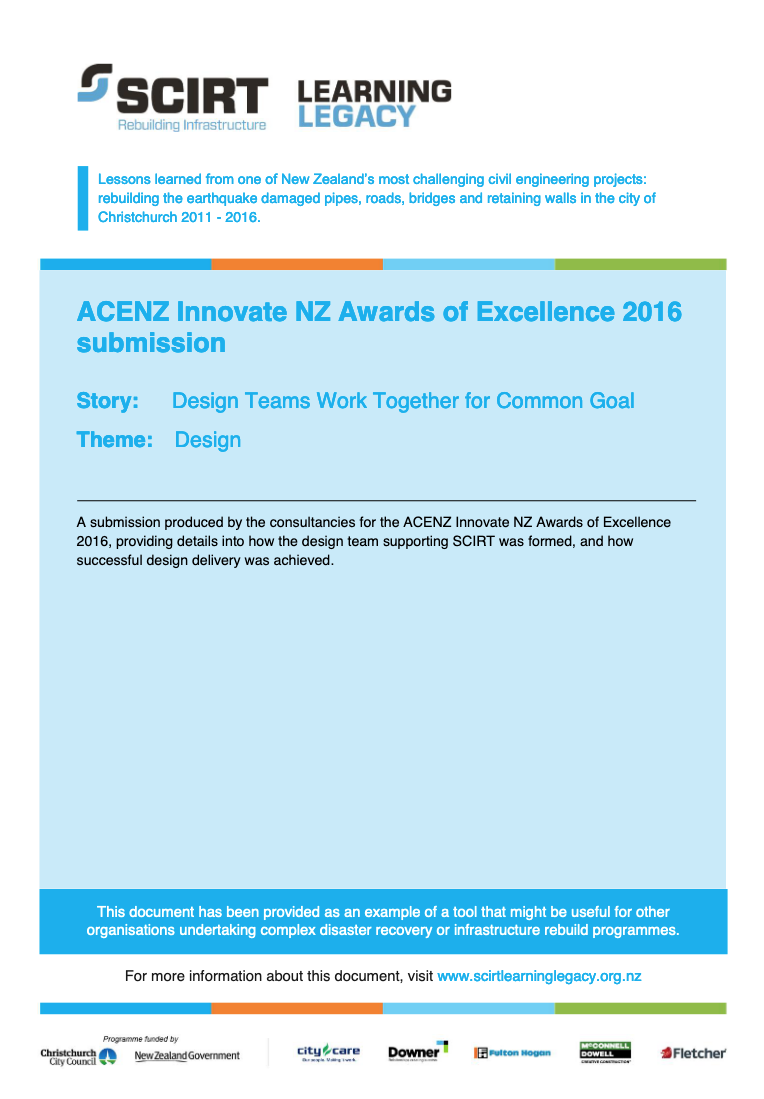 A submission produced by the consultancies for the ACENZ Innovate NZ Awards of Excellence 2016, providing details about how the design team supporting SCIRT was formed, and how successful design delivery was achieved.