In response to driver frustration and to encourage patience and safe driving habits during traffic detours and delays, stationary drivers were given “chocolate fish” (iconic New Zealand sweets) wrapped in a message about the project.

With much of the damaged horizontal infrastructure under the road corridor, SCIRT work often had a high impact on road users. While a lot of planning went into minimising traffic delays and detours, in some locations these were inevitable. They could last for many months and create pressure and delays along detour routes.

The SCIRT Communication Team identified one particularly congested area which was affecting commuters through a major transport route during peak hour traffic. This was causing heightened driver frustration. It had the potential to create unsafe driver behaviour. In response, and to encourage driver patience and safe driving habits, SCIRT sought out locations to safely interact with motorists stopped in traffic because of SCIRT work.

Dressed in full SCIRT-branded personal protective equipment, and monitored by safety personnel, the team handed out chocolate fish-shaped sweets, which are an iconic New Zealand confectionery, to stationary drivers at intersections. The fish were wrapped in an information flyer about the project to help drivers understand the delay and thank them for their patience and tolerance. The slogan on the flyer was: “Doing the right thing at roadworks is as Kiwi as … a chocolate fish.”

SCIRT received excellent feedback for this initiative which was also encouraging safe driving behaviour. This low cost intervention, less than $1 per unit, was used at many locations to engage with people affected by traffic delays as a way of recognising and rewarding good driver behaviour. This also helped to build tolerance and understanding of necessary SCIRT works, and raised many smiles. 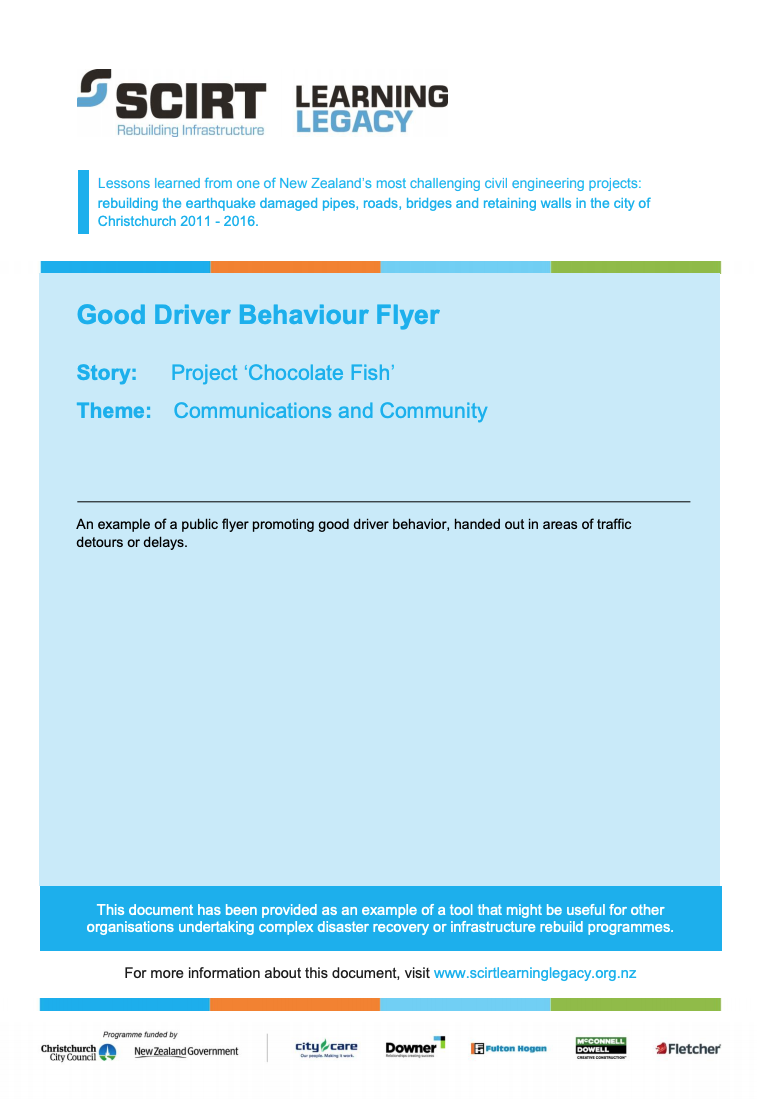 An example of a public flyer promoting good driver behaviour, handed out in areas of traffic detours or delays.